January has started off the knitting year well, with four (count 'em, four!) finished objects. The first couple weeks of the month, I was sofa-bound after foot surgery, so I did a lot of knitting. In January, I started---and finished---two shawls, Multnomah and Gaia, and two pairs of socks. The shawls haven't been blocked yet, so today's post is about the socks. 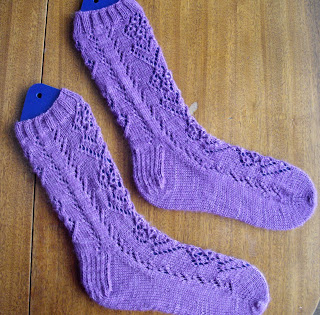 Regular readers of this blog won't be surprised to hear that both pair of socks were by Wendy Johnson. The first pair, for a knit-along (the Socks from the Toe Up KAL group, for those of you on Ravelry), was Sheri's Posies Socks. My Posies were knit with Lorna's Laces Shepherd Sock, in the Grapevine colorway. (As always, click on any photo to enlarge.) I made some modifications to fit my narrow feet. I removed two stockinette  stitches on either side of the center panel. Then, because of a gap developing at the beginning of the round next to the side panel, I moved the side panels one stitch closer to the center. If I knit these socks again, I won't move the side panels; the crisp line up the side "seams" became, instead, a four-stitch column. My final modification was to use K2, P2 ribbing, which, in my opinion, holds socks up better than K1, P1.

I started these socks on 02 January and finished them on 29 January. 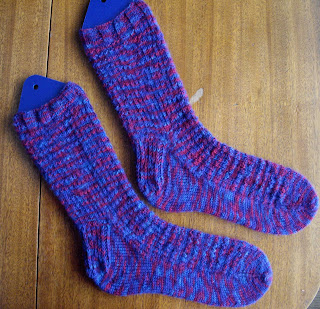 The second pair of socks was Ms. Johnson's Sunrise Socks. These socks were knit with Zitron Trekking Hand Art yarn, in the Atlantik 506 color- way. This yarn had some difficulty deciding what pair of socks (i.e., what pattern) it wanted to be.  The color repeats are so short that the color variation can obscure the pattern. These socks were ripped back to the end of the toe increases twice as I attempted to find a pattern that suited the color variation in the yarn. The Sunrise Socks were a good choice, since the patterning is minimal. The only change I made in the pattern was in the ribbing; I used P3, K3 ribbing, and added two stitches near the end of the first round of ribbing for a true P3, K3 rib. I started these socks on 04 January (I think---all that ripping back to the toes makes it difficult to remember) and finished them on 31 January.

Is your knitting year off to a good start?