My August knitting was less varied than any other month this summer. A great deal of time was spent test-knitting one garment, leaving little time to knit other things. Not that that fact stopped me from knitting---and finishing---other garments. 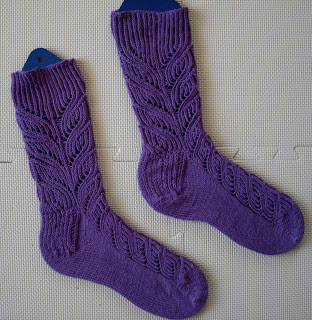 First up in August was Wendy Johnson's Phoebus Apollo Socks. My socks were knit with Cascade Heritage Sock Solids yarn in the Purple Hyacinth colorway. Although the pattern looks cable-y, there isn't a cable to be found. The moving stitches are created by cleverly placed combinations of knit2together, slip-slip-knit, and yarnover. (As always, click on any photo to enlarge.)

The pattern was interesting enough to hold my attention all the way to the top of the socks. The photo below shows a close-up of the pattern. The socks, which were knit toe-up (my favorite method!), have a slip-stitch heel with a gusset and K1P1 ribbing. Since I made these socks for myself, I used a sewn bind-off. (The stretchier bind-offs, such as the Russian bind-off and Jeny's Surprisingly Stretchy Bind-off, are too loose on me, but work well for other members of my family.)

I started these socks on 23 July and finished on 11 August. They were my second project for "Camp Loopy"---a camping-themed series of projects (with prizes) sponsored by The Loopy Ewe. (My first Camp Loopy project was the Roma Shawl.) 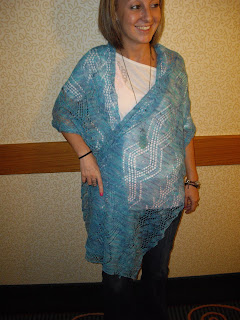 Next, I finished up a shawl I started last year. This is the Diamonds and Branch variation of the As One Stole. I test knit this pattern last summer, but had lots of yarn left after completing the ten pattern repetitions the pattern required. After giving the designer all the information she required about the stole, I made mine longer. My plan was to knit until I ran out of yarn, but I stopped after fifteen pattern repetitions, when the shawl was almost as long as I am tall.

The shawl was knit with Interlacements Spiderweb yarn in the 201P Blues colorway. I used 925 yards. After blocking, my shawl was 87 inches long and 22 inches wide. I started this shawl on 16 July 2010 and had knit 10 pattern repetitions by 24 August 2010. But it took me until 15 August 2011 to knit the five additional pattern repetitions, mostly because I knit many other projects in the meantime.

My next project was test knitting the pattern for a Danish work shawl. The designer has not yet released the pattern, so I can't blog about this shawl yet. 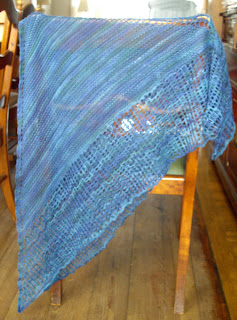 Next, I finished the Old Man of Storr shawl, which I started on 04 July 2011 for a "knit in the car" project. I only worked on this shawl in the car while my husband was driving. The shawl was knit with Dream in Color Smooshy yarn in the Ocean Current colorway. 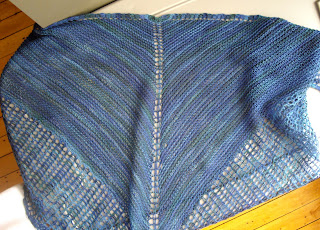 I love the colors in Dream in Color yarn, and this colorway was no exception. The shawl was an easy knit, but although I followed the pattern exactly, I ran out of yarn partway through the fifth pattern repetition. (The designer had used DIC yarn, but knit six complete pattern repetitions.) I had to rip back two rows to have enough yarn to bind off the shawl, and even then I fell four yards short. The final twelve feet of the bind-off were knit with Dream in Color Smooshy in Romeo Blue, which was left over from a pair of socks I knit the BoyChild a year or so ago.

My final project in August was LeLe's Square Shawl by Nancy Bush, from her book, The Knitted Lace of Estonia. I started this project on 17 August, using Fiesta Gracie's Laces in the Arctic Ice colorway. I'll blog about this shawl in September, since I knit half the shawl in August and half in September.

What have you been knitting this summer?

Susannah
Posted by SusannahC at 1:01 PM No comments:

I've been busy knitting (and not blogging), but I've also been waiting for a couple patterns I test knit to be released. One pattern still has not been published. 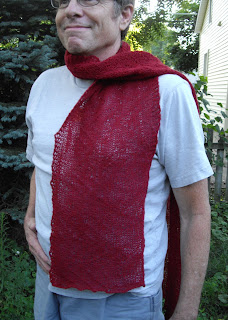 My July adventures in knitting started with test knitting a scarf for Esther Budd, the designer for whom I test knit HRH Kate's Shawl in May. This scarf comes in three variations (as did HRH Kate's Shawl); I knit the second version, as I did for Kate's Shawl. Choosing the same pattern variation to knit was probably a mistake; I was bored with it long before I finished the scarf. (As always, click on any photo to enlarge.) 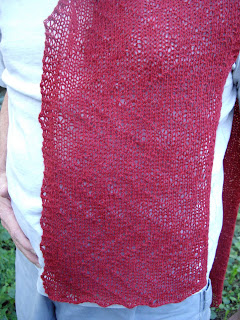 The scarf was knit with Black Water Abbey two-ply sportweight yarn, in the Haw colorway. I used 1.25 skeins or 438 yards. I started this scarf on 03 July and finished it on 14 July. The close-up on the right shows the zig-zag pattern more clearly. 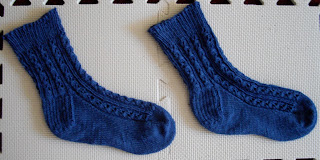 My next knitting adventure, another test knit, was a pair of socks---the Ornamental Socks by Angela Whisnant. It had been at least a month since I'd knit a pair of socks, so I was happy to knit these. The pattern close-up below better shows the design, which looks like a shamrock.

The socks were knit toe-up, in Schoeller + Stahl Fortissims Socka in the 1015 Blue colorway.  I started the socks on 12 July and finished on 22 July. 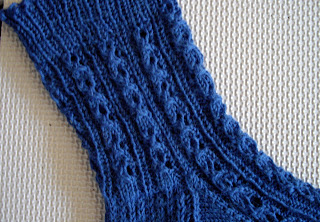 One bit of advice for anyone planning to knit these socks: Don't knit them for someone with big feet. The pattern repetition is very small, and even though I was knitting the socks for Niece-with- Smallest-Feet, I was bored with the pattern by the time I turned the heel. 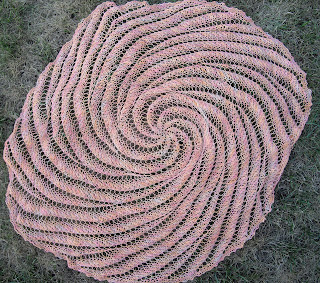 My final project was a shawl I started in May. This was another test knit. I call it the Name Game Shawl, but the designer, MMario, named it "They Call Me MMario." He described it as "a warped version of feather and fan crossed with a left-handed swirl."

The shawl, which was worked in the round, was knit with Great Adirondack Silky Sock yarn in the Cantaloupe colorway.

I started this shawl on 09 May and finished it on 30 July. I used 2.3 skeins, or 830 yards, of yarn. This shawl was my "knit during lace class" shawl, which meant that I only knit it on Tuesday afternoons, except at the very end, when I used it as my "knit in the car" project, then finished it on a weekend.

The last project I started in July, a pair of socks, I'll tell you about with August's adventures, since more knitting was done in August than July.

What have you been knitting this summer?


Posted by SusannahC at 3:46 PM No comments: