The photo says it all. 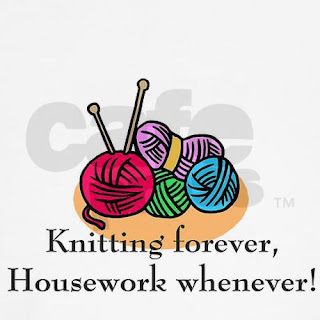 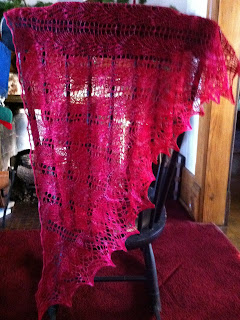 The final shawl I knit in 2011---shawl #24, counting only those shawls started and finished in 2011---was the Flambe Shawl by Michelle Miller, a.k.a.  Fickle Knitter. This shawl is a fast, fun knit, and the result is gorgeous. (As always, click on any photo to enlarge.) 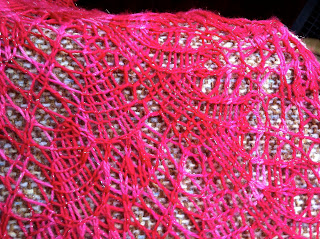 My Flambe Shawl was knit with one skein of Dream in Color Starry in the Honey- moon colorway. I love the added sparkle that Starry brings to this shawl, as shown in the photo at right. (I hope everyone's browser shows the shimmery aspect of this yarn.) I started the shawl on 11 December and finished on 18 December. 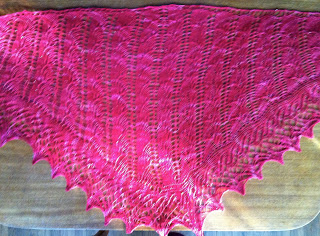 As with many of Ms. Miller's shawls, the body is knit first, then the edging is knit on. The resulting shawl, shown at right, is lovely.

I haven't worn my Flambe Shawl yet, but I'm looking forward to doing so.

I still have one shawl and one jacket from 2011 to block. Readers of this blog have no doubt guessed that the actual knitting appeals to me more than blocking or finishing. Partly the delay in blocking these two garments was due to the holidays, when I put away my blocking boards, my swift, and my ball winder. But partly it has been due to my interest in knitting new projects, particularly a modified cardigan version of Alice Starmore's Na Craga. More about that later.

How much of your knitterly self do you see in this picture?
(As always, click on the photo to enlarge.) 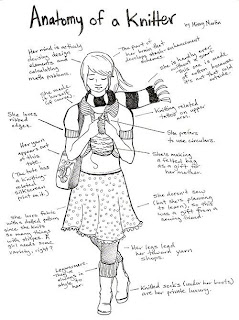 It's cold and snowy in northeast Indiana. I hope you're staying warm and knitting a lot. 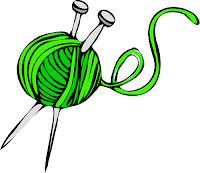 I use Knitmeter.com to keep track of how much I knit on various garments. I usually don't update my projects there until I finish a skein of yarn (for multi-skein projects) or until I finish a garment (for single skein projects). On Saturday evening, Knitmeter informed me that in 2011 I had knit 24,788 yards. That's 14.1 miles! A pretty productive year, I'd say.

I'm making knitting plans for 2012. So far, I plan to knit 12 shawls (but only 12), at least one sweater, and several pairs of socks. The sweater will be mine. So will a pair or two of socks, and probably a few of the shawls. The rest will undoubtedly be Christmas and birthday presents.

What are your knitting plans for 2012?

The sweater was a modified version of Ann Norling's Basic Kids' Sweater and Vest pattern---the same pattern I used for his cousin's sweater. The cardigan was knit with 3.5 skeins of Plymouth Encore Worsted yarn in color 054. I was not there to see him open it, and my niece has not yet sent me a photo of him wearing the sweater, so this photo of the sweater blocking is the best I can do. (As always, click on any photo to enlarge.)

I knit the sweater in one piece to the armholes, then knit the back, then knit both front sections simultaneously. I used a three-needle bind-off for the shoulder seams, then I picked up and knit the sleeve stitches at the armhole and knit the sleeves down. This deviation from the pattern required minimal finishing and produced stronger seams, making it perfect for an active, six-year-old boy. I started the sweater on 11 November and finished on 17 December. 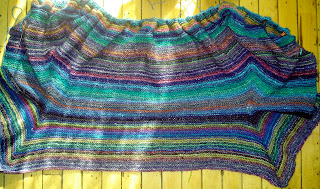 The next finished object was a jacket that had been lan- guishing on the needles for about 18 months until I started my "race to the finish" back in October. Long-time readers of this blog will recall that it was one of my entries in last year's Ravelympics---one that, regrettably, was barely touched during that time. The photo shows its state in February 2010. 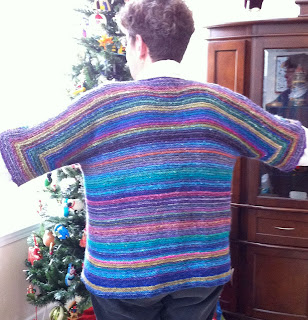 I call it the Coat of Many Colors, for obvious reasons. The pattern is Elizabeth Zimmer- mann's Adult Surprise Jacket.

My jacket was knit with seven different colorways of Noro Silk Garden. I started this project on 28 December 2009, made good progress until late January, when only the placket remained to be knit, then ignored it for far too long. I had a difficult time with the shoulder seams: the fourth attempt did the trick, but I'm sure I gained some grey hairs in the process! I finished the jacket on 19 December 2011 and wore it for Christmas. 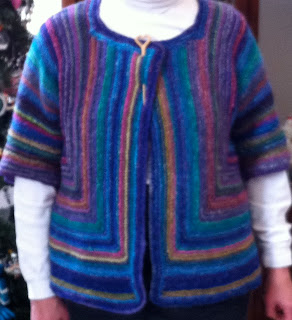 I chose not to extend the sleeves, making the jacket more kimono-like. That decision led me to rip out the placket and the buttonholes therein, and re-knit it without buttonholes. I finished the jacket with a border of single crochet. Since I never liked crocheting, that choice was a difficult one, but the crocheted edging gives the jacket a more finished look.

Since finishing this jacket, I have knit (start to finish) a shawl (currently on the blocking board), finished a shawl of my own design I started last year (waiting to be blocked), a pair of socks (blocking), and another jacket (waiting its turn to be blocked). The Coat of Many Colors and the latter three garments were the main focus of my "race to the finish"---my attempt to finish a number of garments that I hadn't touched for months, so I could start new projects in the new year.

I haven't decided whether to start 2012 knitting a sweater---I've narrowed it down to two patterns---or a shawl---choices narrowed down to three---or both. What are your knitting plans for 2012?

Susannah
Posted by SusannahC at 5:45 PM No comments: