I'd better post photos of the rest of the knitting projects I finished in December. (Particularly since I completed my first FO for 2011 yesterday.) 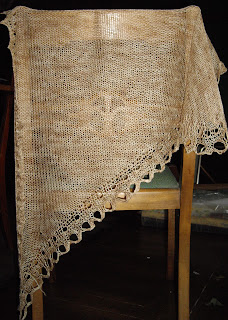 The first item, the Frosting Shawlette by Erica Jackofsky (a.k.a. Fiddle Knits), was knit in July and August (27 July--11 August), but not blocked until the weekend before Christmas. The shawlette, which was a fun, fairly fast, and easy project, was still one from which I learned something new. I had never encountered bird's-eye lace before, but as you can see from the photo, the border of the shawlette is all bird's-eye lace. (As always, click on any photo to enlarge.)

The Frosting Shawlette was knit in Frog Creek Fibers Verdant yarn, in the Cinnamon Toast colorway. I liked this yarn a lot; unfortunately, the dyers are on an indefinite hiatus. This shawlette was my Christmas gift to my son's girlfriend. 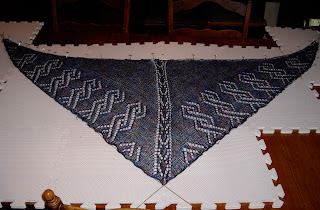 The next finished object, another shawl, was also started in the summer. I designed this shawl to be knit with one skein of yarn, and started knitting it in mid-August. I knit on it for three days, then set it aside, and didn't pick it up again until the day after Christmas, and finished it in three days. When I picked it up again, I ripped out several rows and changed the pattern---unfortunately, not for the better. But it was my first triangular shawl design, and I learned several things from it, so in that respect, it was a success. This shawl was knit in Great Adirondack Silky Sock, in the Grenada colorway. Since this shawl was an experiment, I made it for myself. 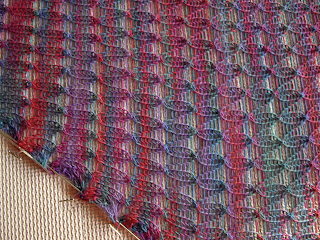 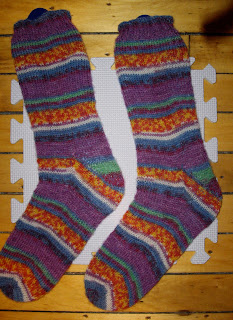 My final finished object for 2010 was the pair of socks I knit in December. These socks are Wendy Johnson's Basic Gusset Heel Socks. I knit them using Opal Antonia aus Tirol yarn, colorway 2802. I started the socks on 04 December, finished the knitting on 30 December, then wove in the ends and blocked the socks on 31 December. Since I wasn't sure I would finish the socks before or after Christmas, I made them for myself. : )

Did you end the year with a knitting blitz? I had hoped to finish a few more things, but...