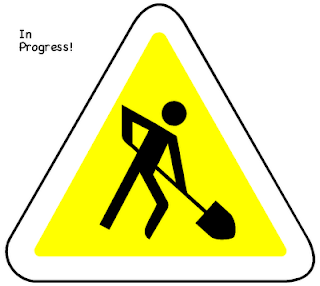 I finished the shawlette for which I was test knitting the pattern on Wednesday (the 11th). I was afraid that I would run out of yarn before I reached the end of the pattern, but after I bound off, I had two whole yards of yarn left. That's about as close as I care to come.

With the wedding stole, on the other hand, I will have yarn left over when I reach the end of the pattern. Last night, I hit the 85 percent mark: I left off halfway through the ninth pattern repetition. (The pattern calls for ten repetitions.) I may add a few more pattern repetitions, to add a bit of extra length and to use all the yarn.

I will post pictures of the shawlette and the wedding stole once the designers publish the patterns and/or give me the okay to post photos of their designs. 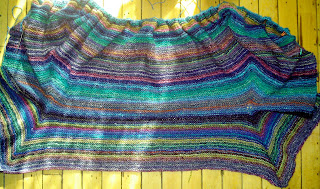 One of the reasons I haven't cast on the shawl of my own design is that I have been working, off and on, on the Coat of Many Colors---the Adult Surprise Jacket knit in various Noro Silk Garden colorways. The Coat of Many Colors now has buttonholes! (TCOMC has been waiting for its buttonholes since mid-January. In April, for part of a day, it had ugly one-row buttonholes. Now, however, it has nice, neat, three-row buttonholes.) I need to knit a couple more rows on the placket, then it will be time to bind-0ff. Long-time readers of my blog will recall that the placket row has more than 700 stitches, so knitting a row takes a while. Early in the week, TCOMC was my it's-too-late-at-night-to-knit-lace project; now the Girasole seems to have taken over that role. But I will finish TCOMC this month! Once the knitting is completed, I'll have to weave in the skillions of yarn ends on its back side. (The photo shows the state of the Coat of Many Colors in late January.)

I want to cast on the shawl I designed in the next day or two. I plan to knit it during the "Kick-off Celebration"---the Powers That Be's term for the mandatory three days of speechifying, meetings, etc. that faculty and staff are required to attend on Wednesday, Thursday, and Friday.

I have not yet cast on my August pair of socks. Socks would be another good project for the Kick-off Celebration, so I hope to get this month's pair started before Wednesday morning. Or perhaps I'll start them Wednesday morning, during the first speech of the day. This month's pattern is a more manly one than most of Ms. Johnson's patterns, so I was contemplating knitting these socks for the Boy Child. But given that this month is half over, I may not have time to knit for Bigfoot. I'll have to think about that some more between now and when I cast on.

Also on the needles---but about three weeks behind the rest of the group---is an Aran KAL. This sweater (called Ingvold Aran) is being knit from the top down. I'll be knitting a cardigan, but at the moment, I'm still working on my swatch cap. A lapful of worsted wool is a bit much in 90-plus degree weather (which is why I'm three weeks behind everyone else, since they live in cooler climes).

What are you knitting this month?

Susannah
Posted by SusannahC at 2:21 PM No comments:

I have finished several projects this month---three shawls and my July pair of socks. 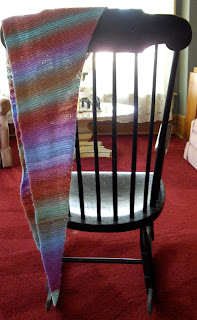 The first object finished was a scarf/shawlette. The pattern is called Baktus. It's a simple, easy knit---all garter stitch---and it is knit from one side to the other. Mine was knit with two skeins of Crystal Palace Mini Mochi yarn in the Tropical Ginger colorway. I started this scarf on 29 June and finished on 11 July. This scarf will be a Christmas present for my youngest sister or one of my nieces. Once I have all my Christmas knitting done, I will decide who gets what item. (As always click on any photo to enlarge.)

The second object finished was a lace scarf for which I test knit the pattern. The pattern is called Easy Bamboo Lace Scarf, and it is by Michelle Miller (a.k.a. Fickleknitter). My scarf is made out of Monkeypal Superwash Sock yarn, in the Purple People Eater colorway. It was a fast, fun, and easy knit. I started on 08 July and finished on 15 July, despite several restarts attempting to get gauge. The photo at left, taken while the scarf was still on the block board, shows the pattern better; the photo on the right shows the color variation and the "big picture." 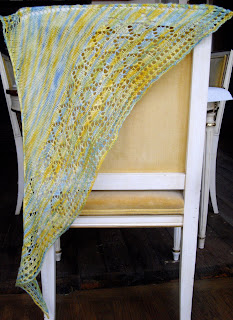 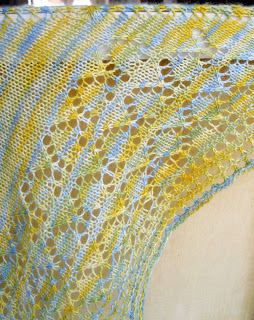 My third finished object was a shawl. (Are you noticing a trend here?) The pattern is Reflection Shawl by Ruth Greenwald. It is knit with Fleece Artist BFL Sock yarn in a colorway dyed for a sock yarn club I belong to. (BFL is Blue-Faced Leicester.) This was the first time I'd used a yarn with a BFL base, and I liked it. This shawl was also a fast knit. I started on 17 July, restarted (because I thought my cast-on was too tight) late (nearly midnight) on 18 July, and finished on 24 July. This shawl was knit from the neck down---but started with only 11 stitches (the center panel and two stitches on either side of it). As I neared the end of the pattern, I had plenty of yarn left, so after determining how many yards it took to knit a row, and how many yards of yarn I had left, I added ten rows of eyelet alternating with garter stitch ridges before the final rows of eyelet and garter stitch. This shawl is my younger sister's Christmas present. When I opened the package and saw the yarn, my first thought was "Linda yarn." Her favorite color is yellow. 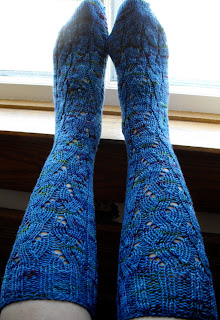 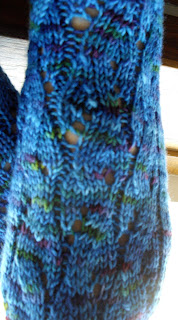 My fourth---and final---finished object this month was my July pair of socks. These are Wendy Johnson's Serpentine Socks from Socks From the Toe Up. My socks are knit with Colinette Jitterbug, a wonderful sportweight sock yarn that I had never used before, in the Blue Parrot colorway. Although at first glance the pattern appears to be cables, there is nary a cable to be found. The movement of the stitches is accomplished by strategically placed yarn overs and knit two togethers or yarn overs and slip-slip-knits. The bottom photo shows the pattern and the color variation in the yarn. These socks were another fast, fun knit. I started my socks on 01 July, knit regularly on them until the heels were turned on 06 July, then got distracted by shawls, etc., and barely touched them again until the end of last week. I finished my socks on 27 July.

As you can see, I knit until I was almost out of yarn, resulting in knee socks. The socks hadn't been blocked yet when this picture was taken, which is why I'm modelling them instead of my sock blockers doing the modelling.

Although I hoped to finish a few projects that have been languishing on the needles for a while, I wasn't able to do that. But I have been working on the sleeves of my great-niece's sweater-tunic.

I've been wanting to start a sweater. I've knit the gauge swatch, and since the sweater is an Aran with a lot of different cables, I'm knitting a swatch cap, so I'll know the gauge for each of the cables. Before I can start the sweater, though, I have to finish the one of the Adult Surprise Jackets, since my two US8 size long circular needles are being used on the ASJs.

The wedding stole I'm test knitting is coming along. I'm about halfway through the third pattern repetition.

What are you knitting this summer?

Susannah
Posted by SusannahC at 12:40 AM 2 comments: